The Community of St. Panteleimon was founded in 1975 by Archbishop Athenagoras (Kokkinakis) of Thyateira & Great Britain. He celebrated the first Divine Liturgy on the 27th July 1975 at the Community’s original location at the Anglican Church of St. Peter in Sumner Road, Harrow. 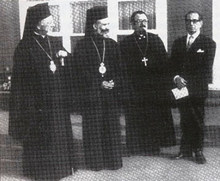 Father Kyriakos Korniotes was apponited to serve as the first Parish Priest and Mr. Pantelis Nearchou was elected as the first President of the Community.

During March 1978 Archimandrite Meletios Webber became the new Parish Priest. The Community then moved to the Methodist Church at Welldom Cresent, Harrow on 3rd May 1981.

Father Barnabas Georgiou took over as the new priest in March 1985. The Community moved yet again in 1989 to another building – the Anglican Mission Church of the Holy Spirit (660 Kenton Road, Kenton, Harrow). This was to be the Church’s permanent location for the years to come.

Two more priests served the Community between the years 1989 and 1993: Archimandrite George Papachrysostomou (now Bishop of Paphos in Cyprus) and Economos Soterios Constantinou. Protopresbyter Anastasios Salapatas joined the community in June 1993. In July 2018 our community gained a second priest Fr Konstantinos Papageorgiou. Fr Anastasios moved to Bristol in November 2020 and Protopresbyter Fr Konstantinos took over as the priest in charge.

On the 21st January 1994 the Community completed the purchase of the freehold property of the Holy Spirit Church, the neighbouring hall and the vicarage. The Community numbers some 10,000 members and is a registered charity, number 1029145.

Construction of the Church of the Holy Spirit (1932)

The church of the Holy Spirit after its completion

Memorial photo from the oath of the new Ecclesiastical Committee of St. Panteleimon (21/01/2001)

The teacher of E.E.A Demetrios Mitropoulos, with the Community Committee, after his lecture at the Holy Church of St. Panteleimon. (28/05/2000)